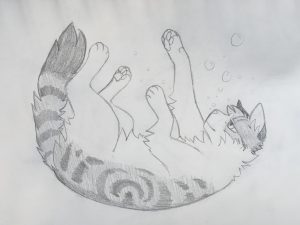 Character belongs to me.

Here’s a drawing I made of one of my OCs, Emberblaze! She’s from a Scratch roleplay. If you don’t know, OC stands for original character. She’s a RiverClan warrior cat I made up. Emberblaze has long, silky, ginger tabby fur and yellow eyes. She’s ambitious, brave, fast and a skilled hunter and fisher. I’ve recently been working on some cat-drawing skills, and I’m really proud of this!

I think I can definitely say I’ve improved on drawing tabby patterns and shading. I also worked on drawing water. I’ve discovered it’s good to put in many different shades of color, and then on top of that just faint bits of whatever color the rest of the scene is. For example, I put some green beside the grassy shore. Another thing I did was add Emberblaze’s reflection in the water, by duplicating her, flipping her upside down, then squishing it down and erase parts. Then I change the opacity to make it faint. I tried using a new technique for her fur to give it a silky look.

“The killer whale or orca (Orcinus orca) is a toothed whale belonging to the oceanic dolphin family, of which it is the largest member. Killer whales have a diverse diet, although individual populations often specialize in particular types of prey. Some feed exclusively on fish, while others hunt marine mammals such as seals and dolphins.”

The orca, sometimes known as a killer whale, is a graceful creature related to the dolphin family. It has smooth skin with an elegant black-and-white pattern.  Because orcas are mammals, like us, they need to breathe oxygen. They do this with a hole in the top of their heads called a blowhole. It is in that particular spot so that they just need to stick their head out of the water a bit, then dive back down into the sea. This is the same with whales and dolphins. Sometimes when orcas surface, they jump out of the water, called breaching. Some say that this is a form of communicating over long distances.