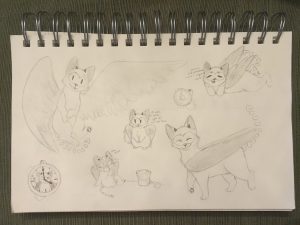 Soooooo I recently binge-watched this animated series called Twelve on YouTube made by Petpyves and it’s like…the BEST SHOW EVER! Go watch it now if you haven’t already: https://m.youtube.com/playlist?list=PLQwMP0Qq6iKZyny_MT_w0fqbYCjeuhF5k

K so after I watched it I couldn’t help but draw fanart, so here are like a million quick sketches of Imp I made while I was in class. Let me know which one is your favorite! I promise next time I’ll post some fanart that didn’t take me twelve (lol) seconds to draw.

…but maybe it’s mine to win!

Here’s a drawing I made of Nightpaw, a Warriors OC of mine. I heard the song “My Grand Plan” (from The Lightning Theif: The Percy Jackson Musical)and thought of her immediately. I think Annabeth has a view of the world very similar to Nightpaw’s. They both feel as if they’re never enough, and they’re desperate to “rise up” and prove themselves, taking huge risks to do so. The part that really matched the most was the part of the song that said “It may not be my quest, but maybe it’s mine to win!” Basically Nightpaw followed some prophecy cats on a quest because she wanted someone to notice her, and I just think it’s really cool that it happened to be the same in both the cases of Annabeth and Nightpaw. Also, I really wanted to try some landscape drawing, and I think it turned out pretty good!

I hope you enjoyed this drawing and my long unnecessarily long explanation of it.

BY THE WAY, LISTEN TO THE SONG AND JUST THE WHOLE MUSICAL IN GENERAL, IT’S AMAZING: https://www.youtube.com/watch?v=WzAGAUCCE04

Hey everyone! Here’s a drawing I made of Clarisse La Rue from Percy Jackson and the Olympians. Just a warning, there are a couple of spoilers for books 4 and 5 (The Battle of the Labyrinth and The Last Olympian) ahead.

I think Clarisse is a pretty good character. She has some nice character development, and at times I can feel genuinely bad for her. Admit it, it would be really hard if someone showed up and completely overshadowed everything you did, especially if you’re a really proud person (which Clarisse is). Then, the whole thing with Chris Rodriguez going mad and Silena dying?? AAH! She’s still a jerk—no doubt about it—but she’s been through some really hard experiences and I think she’s a good person at heart. In the end, she chose to fight alongside the rest of Camp Half Blood and ended up being a really useful part of the battle.

The other thing that bothers me is that in so many books, the bully characters are often described as being really ugly. I mean, look at all the drawings of Clarisse. While the art is still good art, her design isn’t exactly…eye pleasing? I’m not saying that all characters should be beautiful. This is just how I personally imagined her. While she’s not like, a child of Aphrodite or something like that, I don’t think she should be hideous. So this is my design!

Anyway, I’m planning to draw every character from the series and post them here, so look forward to more of these in the future!