I made this sweater for my dog, Ginger. Today was her 6th birthday. ❤️ 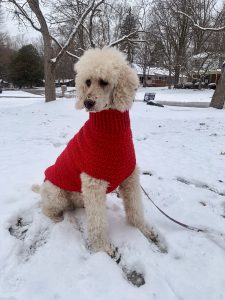 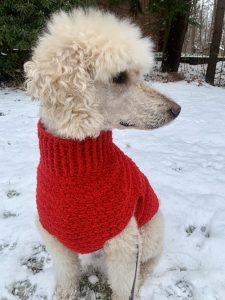 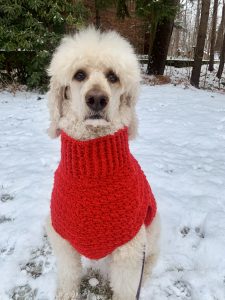 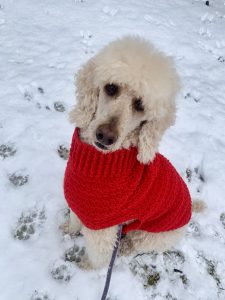 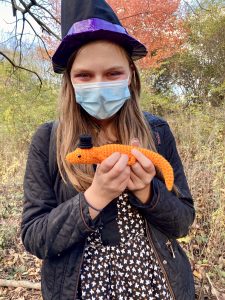 I made this crochet “hat lizard” as a birthday gift for a friend of mine.  Inside joke. This is the second pattern I’ve come up with by myself, and I will be posting it once I smooth out some of the details.

Finally…last, but certainly not least, is this little bear, which I made for my cousin Milo. The free pattern can be found on amigurum.com. I made a couple changes to the original pattern, including the addition of a tail (because, as many patterns forget bears have tails!). My grandma had some jingle bells left over from a previous project, and suggested that I put one inside, because Milo (being 2 years old) might like the sound. With the bell surrounded by stuffing inside the bear’s belly, the sound is somewhat muted, and sounds more like a rattle, but I think it’s pretty cute.

I also thought that adding a scarf would make it look a little more complete, so I made up a quick half-double crochet scarf this morning. Apparently it was a good idea, because later when my other cousin Maggie saw it, she asked for a scarf for her elephant! I was able to crochet a light pink one in about 10-15 minutes, and it turned out really adorable! Now I have 2 more requests from her brothers to make scarves for their wolf and triceratops. Well, I’m glad to see that they liked it!

To see the other amigurumi dolls I made for Christmas, click here. 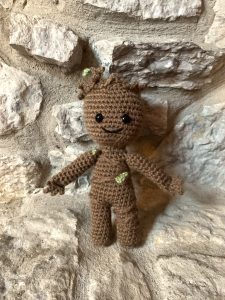 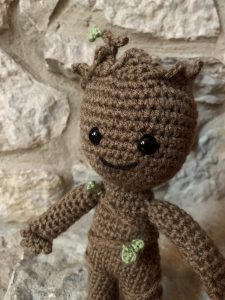 My cousin Oscar is a huge fan of Baby Groot, an adorable tree creature from the Guardians of the Galaxy movies—so I made this little guy for him! I think this was one of the most fun ones to make, though it was a little hard to figure out how I should attach the leaves and the vines that wrap around his body.

This pattern is available on Etsy for just under $5, a price I think is totally worth it! It turned out so cute, and Oscar just loved it.

I also made similar amigurumi dolls for the rest of my cousins this Christmas, which you can find here. 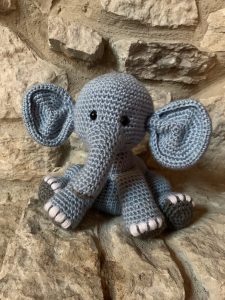 I immediately fell in love with this pattern upon seeing it, and decided to make it for my cousin Maggie for Christmas! You can find the pattern for this little elephant by Mostly Stitchin’ Crochet on Etsy—definitely worth the $5! The directions were really helpful, especially the notes on assembly.

You can see the rest of the amigurumi animals I made for Christmas here. 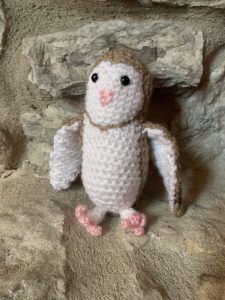 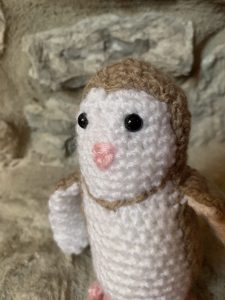 I made this amigurumi owl for my brother. He’s been reading the Guardians of Ga’hoole series recently, and has been absolutely loving them. Consequently, this has also caused him to develop a particular love for owls. I was so excited to find this pattern, which was actually made specifically to look like the main charatcer!

To see the rest of the amigurumi Christmas gifts I made this year, click here. 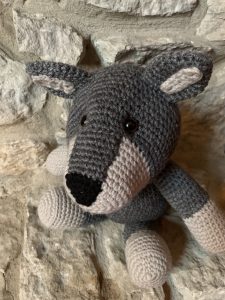 I made this crochet wolf for my cousin Nate. I originally intended to make him a velociraptor, but after struggling to find a pattern, I changed course and made a wolf instead—which, as luck would have it, happened to be his favorite animal! It was the third doll I started for Christmas this year, but I had to hold off for a while because I didn’t have any black yarn for the nose. I finished a giraffe in between, and added the final touches to this wolf after a stop to the store. 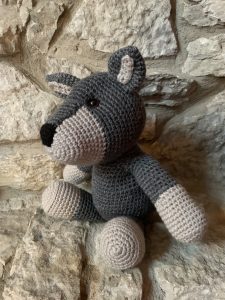 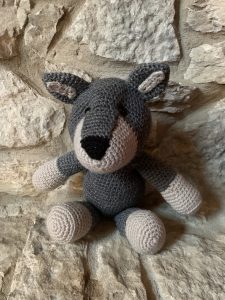 This pattern is also from JessHuff, which I’ve found is a great place for amigurumi patterns. She has a huge selection of cute animals there, and all for free!

If you’d like to see the rest of the amigurumi dolls I made for my cousins this Christmas, click here. 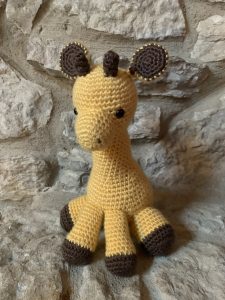 When my cousin Ada was little, she had a stuffed giraffe that she carried with her everywhere, so when I found this pattern that looked so similar to it, I had to make it for her. This baby giraffe pattern, made by Courtney Deley, can be found for free on Ravelry. 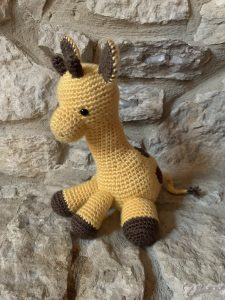 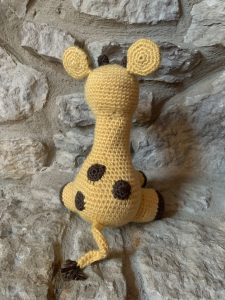 I made an amigurumi animal for each of my cousins this year as Christmas gifts, and you can see them all together here.

I actually made this little triceratops in the car on the way to a wedding in November! The frill around the head used double crochet stitches, making this the first animal I’ve made to use anything but single crochet. 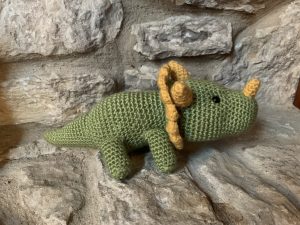 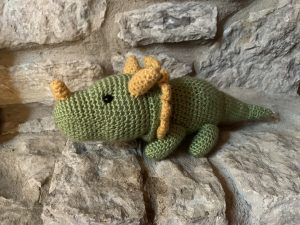 Poor Andrew, the cousin I made this for, got sick yesterday and couldn’t make it to our Christmas family gathering today. Luckily, he was feeling a little better this evening, and I stopped by to give it to him. 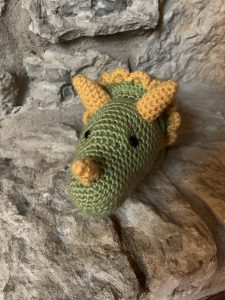 I found this pattern for free on amigurumihouse.com! And if you want to see all of the amigurumi animals together, click here. 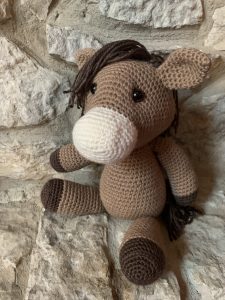 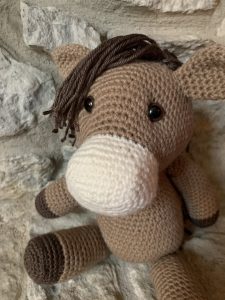 Here is the second Christmas amigurumi doll I made this year, for my cousin Maya. The pattern can be found for free on JessHuff, and is almost the same as the unicorn I made. (Since these were for two sisters, I figured dolls that matched somewhat would be a good idea!)

Click here to see all of the amigurumi animals I made for Christmas together.