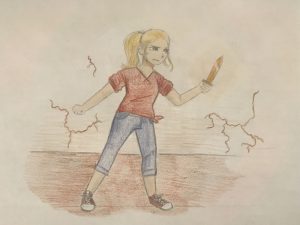 Sooo it’s just a quick drawing I made for a school project, but I haven’t posted anything in a while and it’s not that bad, so have this. It’s Annabeth on her quest I need The Mark Of Athena. Sorry about the bad quality :/

Hey everyone! Here’s a drawing I made of Clarisse La Rue from Percy Jackson and the Olympians. Just a warning, there are a couple of spoilers for books 4 and 5 (The Battle of the Labyrinth and The Last Olympian) ahead.

I think Clarisse is a pretty good character. She has some nice character development, and at times I can feel genuinely bad for her. Admit it, it would be really hard if someone showed up and completely overshadowed everything you did, especially if you’re a really proud person (which Clarisse is). Then, the whole thing with Chris Rodriguez going mad and Silena dying?? AAH! She’s still a jerk—no doubt about it—but she’s been through some really hard experiences and I think she’s a good person at heart. In the end, she chose to fight alongside the rest of Camp Half Blood and ended up being a really useful part of the battle.

The other thing that bothers me is that in so many books, the bully characters are often described as being really ugly. I mean, look at all the drawings of Clarisse. While the art is still good art, her design isn’t exactly…eye pleasing? I’m not saying that all characters should be beautiful. This is just how I personally imagined her. While she’s not like, a child of Aphrodite or something like that, I don’t think she should be hideous. So this is my design!

Anyway, I’m planning to draw every character from the series and post them here, so look forward to more of these in the future!